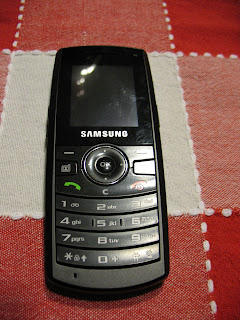 Something embarassing happened to me over the holidays. I wasn't going to mention it because it's one of those stupid things that you don't want to tell anyone about. But, what is life without it's embarassing and funny moments (later upon reflection it can turn out to be an amusing story you can tell at a cocktail party)? We went to a friend's place to celebrate New Year's and I had decided it was time to relieve my bladder of some of its contents. After I was finished 'my business,' I pulled up my jeans and then I felt something fall out of my back pocket into the toilet. I was mortified. I instantly recalled that I had left my cel phone (mobile) in my back pocket. I had sent a text message earlier and I was too lazy to put it back in my purse.


There was nothing to do but stick my hand into the toilet water and retrieve my phone. As soon as I did that, I was revolted at the thought of all the germs and bacteria on the phone, so I immediately stuck it underneath some hot water. Obviously......I'm thinking - will my phone survive this onslaught of liquids? After I gave it a good wash, I took out the battery and sim card, and dried it all with some toilet paper and hoped for the best. For the next two days, I didn't use my phone because I wanted to give it as much time to recuperate. After the two days were over, my husband put the phone back together for me and it seemed to work fine. I was so relieved. It is my second cel phone in one year. But, just a few days ago, it died, croaked, kicked the bucket, bit the dust.....it's definitely gone.