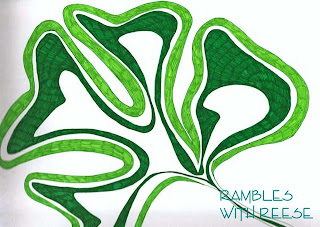 St. Patrick's Day is named after Saint Patrick, a patron saint of Ireland. It began as a Catholic holiday and became an official feast day in the early 1600s, and gradually became a secular celebration of Ireland's culture. It has been written in Irish folklore that he taught and spread God's word to the Irish people and used the shamrock to explain the Holy Trinity (the Father, the Son, and the Holy Spirit). He is considered to this day to be the principal champion of Irish Christianity.

Chicago River is dyed green for St. Patrick's Day
photo credit: http://en.wikipedia.org/wiki/Saint_Patrick's_Day
Although, we're not Irish, nor do we have any Irish blood in our family genealogy, we never miss an opportunity, or rather my husband doesn't miss an opportunity, to drink some Guinness. So, off to the pub we go tonight celebrating St. Patrick's Day after I finish work to our only local Irish pub and hangout - Auld Dublin.
Where will you be celebrating?
Email Post
Labels: Art Daily Adventures Holidays