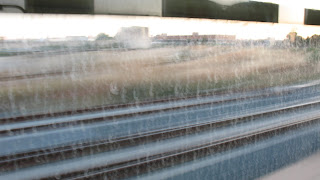 Taking a train or a bus is quite self-explanatory in most countries. However, I can only say that taking a train in Italy is truly an Italian experience. Maybe in other latin countries or developing countries the experience may be similar, but I have no opinion on that at this moment. Using the Italian train website is very user friendly and easy to use. It states the departures and arrivals, and where you may need to stop and change to get to your planned destination. Unfortunately, the trains and the stations themselves do not reflect the modern, user friendly train website. Most of the trains are old and rickety, and they need to check into a train cemetery or recycling depot. There are some newer trains like the city trains or the euro trains, but they are few and far between.

I've been on the train many times in Italy, from small towns to large cities and there is one consistent thing I can rely on. What is it? It's that I cannot rely on Italians being consistent. I wanted to take a day trip to Polignano a Mare, so I checked the departure times on the Internet. Then I went to the train station and bought my tickets, confirming with the ticket agent, the instructions that I had read on the Internet. I have been to Polignano a couple times before, so in my experience, I usually have to change trains in Bari, but this time the Internet instructed to change in Monopoly. So, I confirmed with the ticket agent, "Cambia a Bari or Monopoly?" He said, "Non, non cambia, sempre dritto." I said, "Sei siccurro, non cambia?" He repeated, "Non, non." Sempre dritto translated is always straight, meaning no change. Fair enough and easy, one would think. Anyways, this train ride should take no longer than 2 hours in total. I was on the train for 3 hours and knew something was very, very wrong. I watched field after unfamiliar field from the window seat in the rickety, old train carriage. I finally asked a nice looking woman if this train went to Polignano, and she said, "Non, e lontana. Esci a prossima fermata." Translated, this meant that Polignano is very far, get off at the next stop. That next stop was Ostuni......a very long way from my planned destination. I was livid. I was angry at the train clerk who had sold me the ticket and gave me the wrong instructions and I was frustrated at the level of incompetency that I had experienced time and again in this country called Italy.

Well, to make my story end on a light note.... I decided to make lemonade out of lemons by staying on the train and getting off at Ostuni. I spent 45 minutes waiting for the bus to go into the centre of Ostuni, and then I spent another 30 minutes taking photos of the town before I had to hop back on the bus and catch the second last train out of Ostuni.