i promised you rome and here it is.

this would be my third or fourth trip to rome....i'm beginning to lose count in my old age .-).
rome is often called one of the most beautiful cities in the world.
i won't dispute that nor its grandeur, however, it sure is looking a little tired and old lately.
it's a wish really but i hope the politicians in italy will wake up and realize before it's too late... that one cannot live and dwell in the past of its once former glamour and glory.


i've seen so many beautiful photos of rome and i was hoping that my husband or i had taken at least a few really mesmerizing pictures but after perusing through all our photos...sadly there are few. therefore, instead of trying to post beautiful pictures that millions have  already done before me....
here are some interesting ones instead, or rather, should i say? that 'i' think are interesting .-) 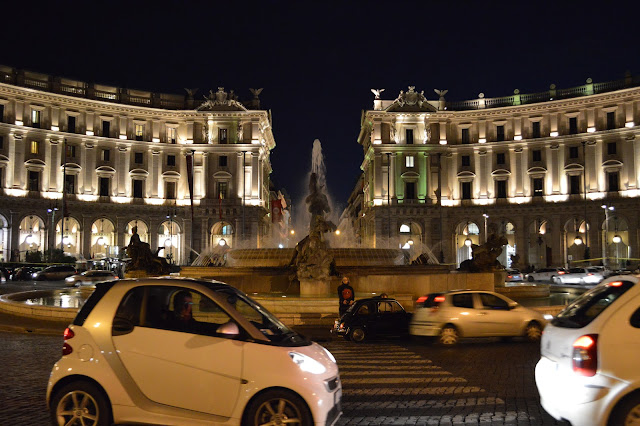 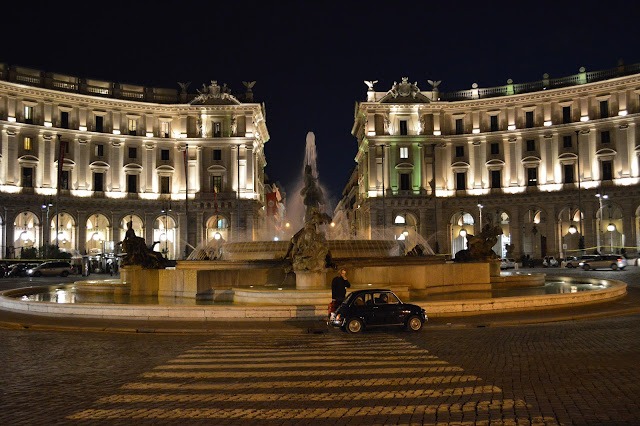 i waited a long time for traffic to disappear from this roundabout, however, this little old cinque cento (500) fiat didn't want to continue on its way. at first i found it annoying but now looking back at the photo, it's quite sweet. 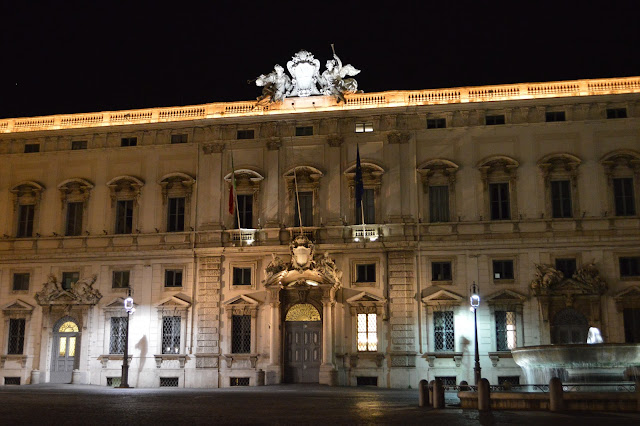 one of many grand official government offices. 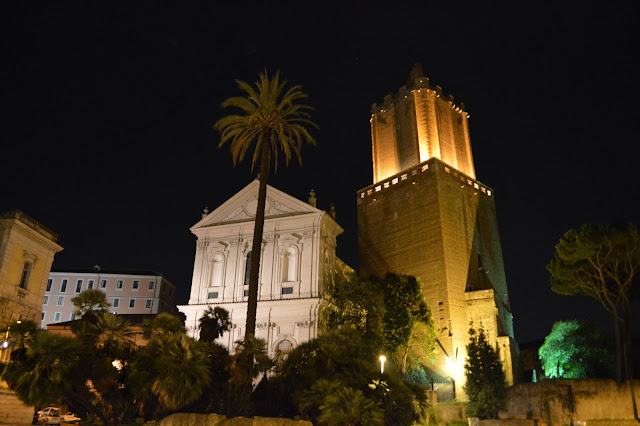 rome is looking quite tropical..... 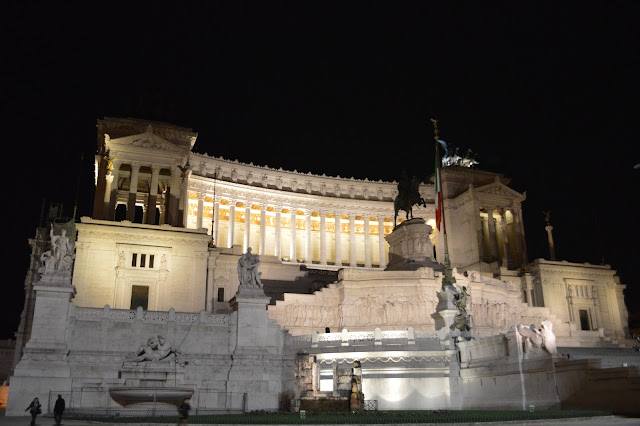 altare della patria, a.k.a the victorian, or altar of the homeland is the palace monument that dominates piazza venezia. 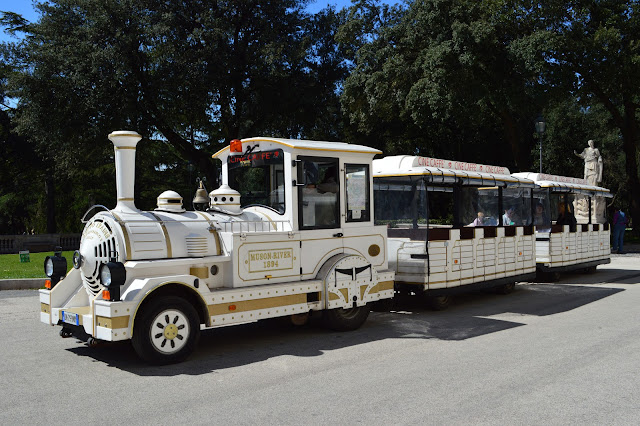 little train at the villa borghese park - a defiite must see. the park is huge so i recommend putting aside several hours or half a day to see this magnificent park. 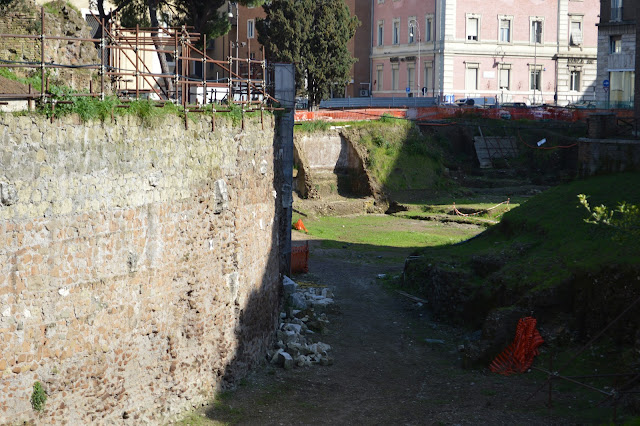 a zoned off site where there are artifacts still to be uncovered. i would think that these areas would be surrounded less by garbage and waste but that is not the case. a downside to this country is that waste is everywhere even in the most beautiful and sacred of areas. 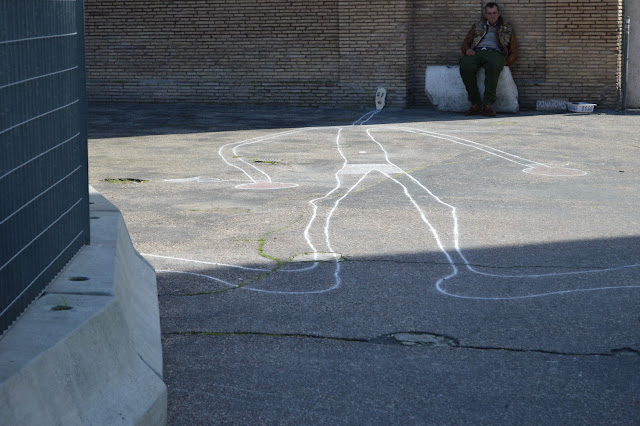 a street artist in an inconspicuous area. it was a beautiful, sunny day and the city was heaving with tourists, yet this particular area was quite barren of any passerbyes. i had wondered why he had chosen this area. 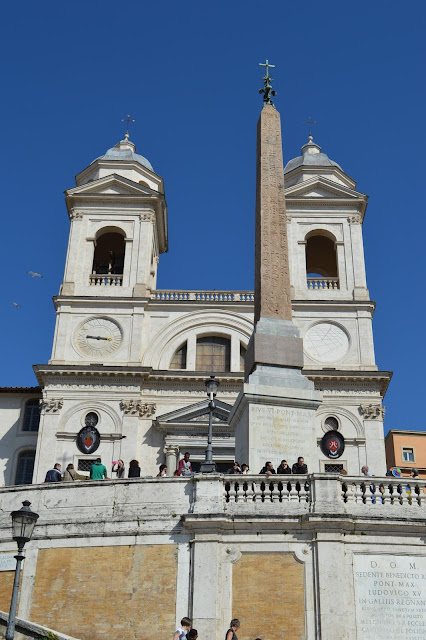 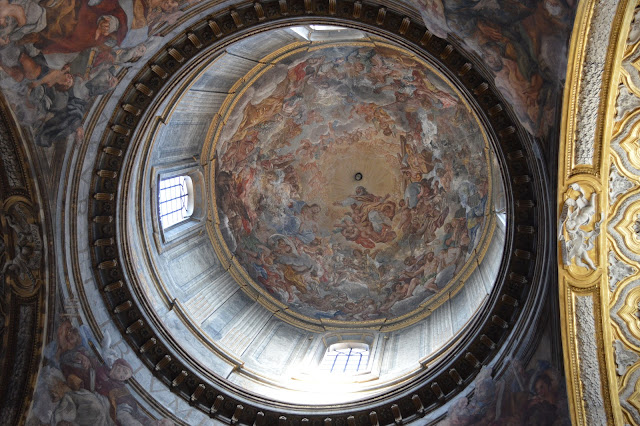 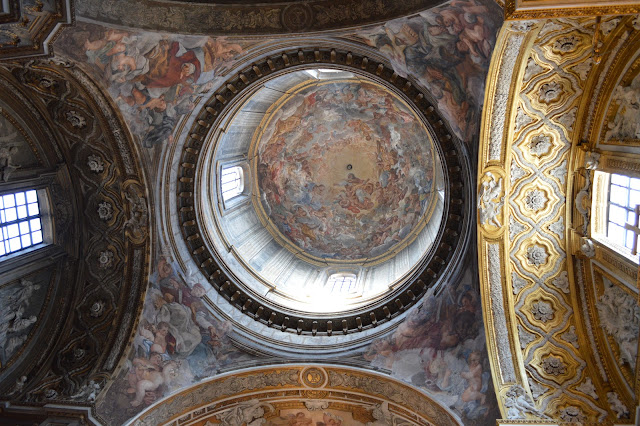 beautiful frescoes in the church (Trinità dei Monti) above the spanish steps. 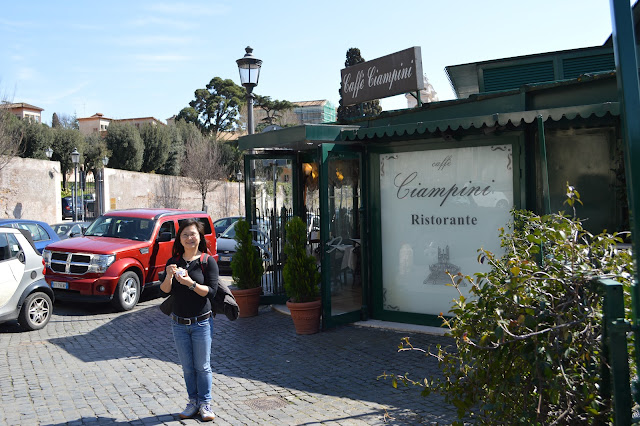 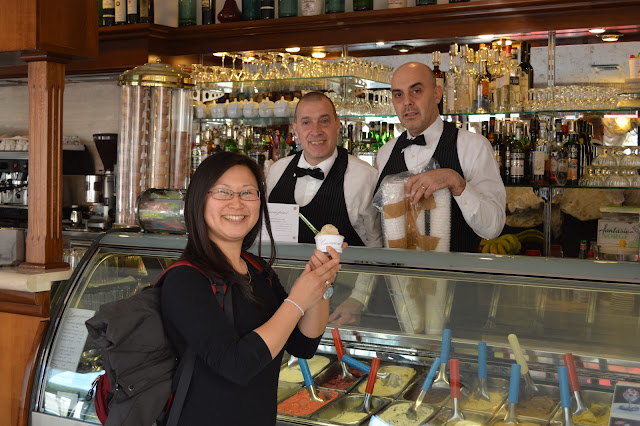 enjoying probably the best ice-cream in rome. this gelateria is right across from the church above the spanish steps.
note that the quality of gelato is not the same in all places.
i enjoyed it so much that i actually went back for a second gelato in a cone. :-) 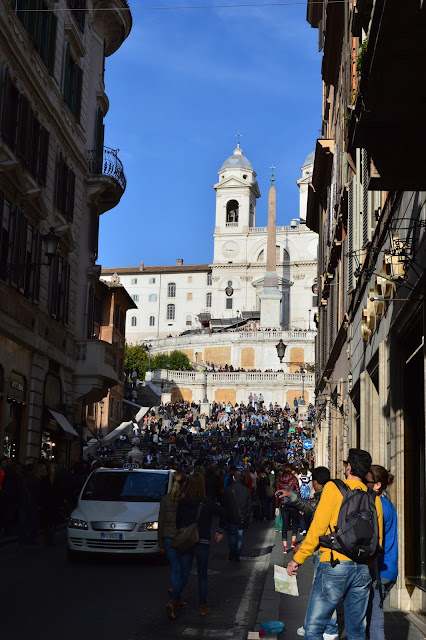 it's not even summer yet and rome is heaving with people and tourists. 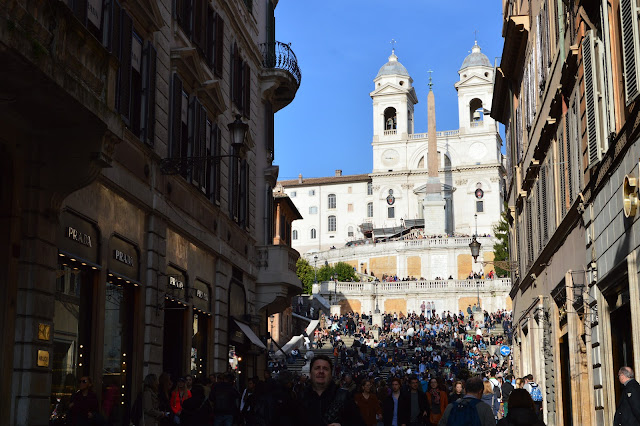 a view of the spanish steps. this road facing it is filled with designer and expensive shops. 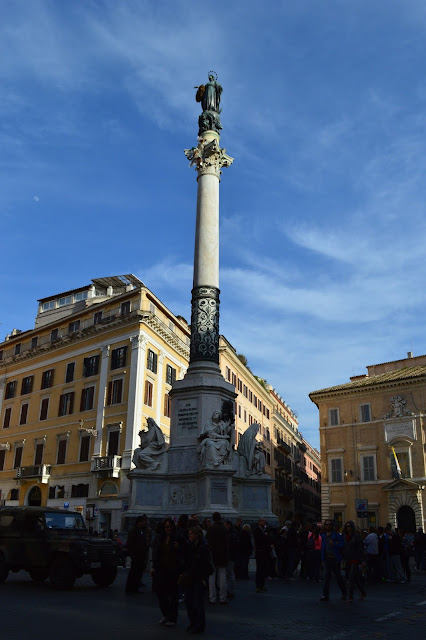 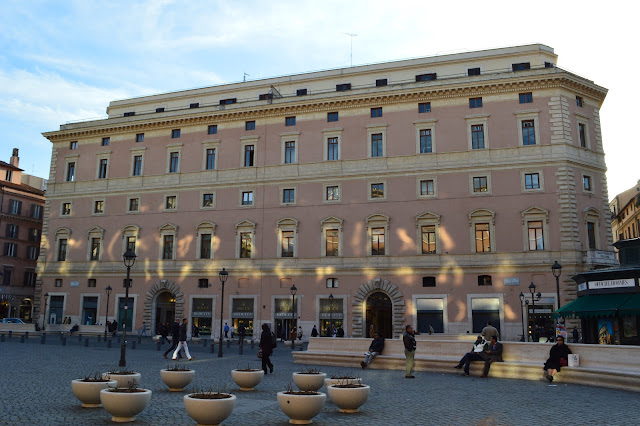 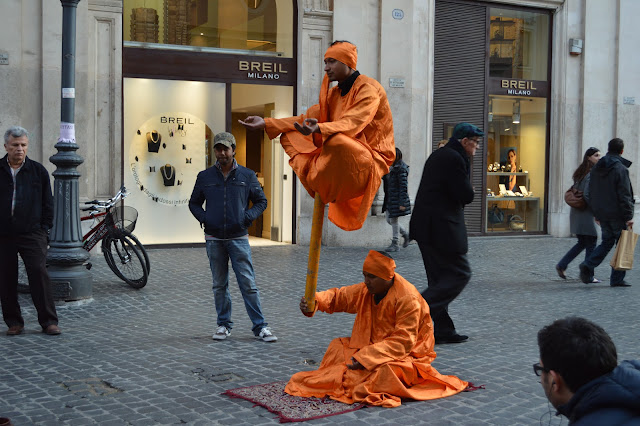 there were many passerbyers trying to figure out how these two street performers managed to hold this form for a long time....i just noticed how some were getting too physically close to them. it's gotta be tough to be a street performer. 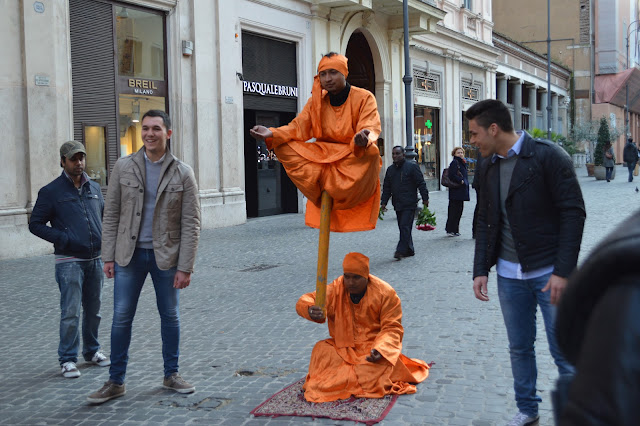 the trip to rome was far from relaxing but still enjoyable. beware that the transporation sector has a strike every week/2 weeks on fridays, which we didn't know about. so don't go buying tickets for buses or subways in advance. we got stuck with 16€ of subway/bus tickets because we didn't know about this and there are
no signs to tell you of this in either italian or english.

consumer beware:  i'm severely lactose intolerant, and one cafe that i went to served me a cappuccino with regular milk instead of soya milk like i had requested. beware that you could be lied to if you're not a regular customer in any place in italy. unfortunately, i'm speaking from experience from my many trips around italy and where i live. i specifically asked for soya milk, stating that I was lactose intolerant and the owner said, "no worries and that they had soya milk." later that evening, I couldn't tell you how much pain i was in. this lasted all through the night and to the next day on my flight home.

other than the hiccups i mentioned, it was a good trip. i found a beautiful FABRIANO shop. it was the highlight of my trip. it had so many lovely stationery, paper, pens, leather, etc. these have to be my favourite type of shops. i love to touch the paper and soak-in the atmosphere. i went away with some lovely new paper and material to draw and paint on.
what's your favourite type of shop to peruse when you're on holiday?

i wrote a lot more than i had intended just because it will be my last post on italy for a while.
i hope you enjoyed it.

have a lovely week my friends!