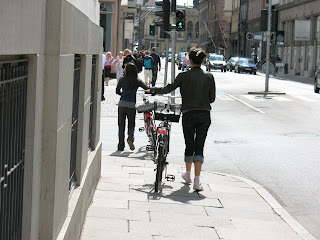 I have just returned from a trip in Copenhagen, Denmark with my fiance and a female friend. We were all touring the city on bicycles for a few days and it became quickly apparent that reading a map and riding a bicycle wasn't the safest nor the smartest thing to do. Unlike being in a car where one person drives and one person reads the map and gives instructions, bicycling requires one person to do it all. I fell into the job of "map reader and memorizer" and I was getting pretty good at it. However, there was one thing impeding my new job - the stereotypical man vs woman behaviour.
I prefer to read and memorize maps until I'm "blue in the face." I hate to ask for directions, unless it is absolutely, undeniably necessary; and then inevitably, the dreaded search for the perfect passerby to ask for directions begins. Honestly - from previous experience, people often give very vague directions and it makes me even more lost. So I follow my intuition trying to find the right person. Sometimes, I never find the right person and I'll walk into a random shop instead to ask for help. I guess I don't fit into the stereotypical female role that is happy to ask for directions.
Our friend Paola is pretty much directionless, as is my fiance, and she prefers to follow blindly and/or ask questions from passing pedestrians. She was quite happy to ask for directions in Copenhagen, as she is the extrovert in the group. My fiance, on the other hand, preferred to lead the group, but since his brain is not wired to remember foreign streets and not keen on memorizing the map, it was hindering my ability to lead the group. He, on his bicycle, would turn right, when we were suppose to go straight on......"Hey, where are you going?" And he would reply, "Isn't this the way?" How on earth do you know it's the right way, if you haven't looked at the map nor have recollection of the streets? He, along with most of his gender, was going with his man-gut feeling. Unfortunately, the man-gut feeling is often mistaken.
Although, we became lost a few times, there were no major disagreements or heated discussions. In hindsight, we did pretty well.....I think. In future, a GPS system would be the way to go, however, the con is that we would lose the brain exercise and adventures of reading and memorizing a map.
Email Post
Labels: Daily Adventures